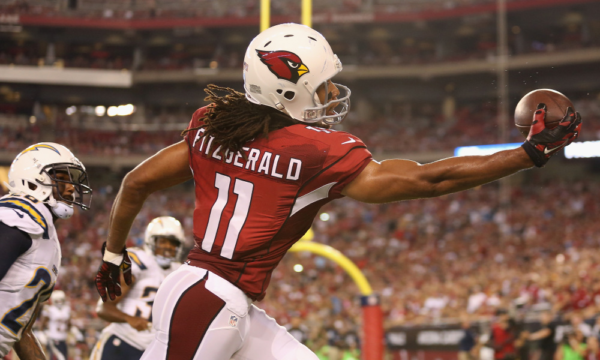 In a league where players are often seen throwing tantrums to force trades, specifically at the position of wide receiver which Fitzgerald plays, Fitzgerald is a team-first player of the highest order. He is one of the NFL’s true good guys and he is one of the premier players in the Arizona Cardinals locker room.

Fitzgerald has an ability to never make things all about him, even when he could. He has shown an unusual level of loyalty to the city of Phoenix and the Cardinals franchise in a professional era where every player out there seems to be about claiming the biggest contract in history at their position.

Now, in his later years, Fitz couldn’t command that type of money. In his prime, however, he could easily have held the Cardinals franchise to ransom for his talents.  He never did.

Fitzgerald could also have easily moved on from Arizona to play for a team more immediately capable of winning a Super Bowl. While he has had some quarterbacks in his career that would be classified as good (along with Kurt Warner who was great), he has also been at the mercy of throws from the likes of Brian St. Pierre, John Navarre, and Rich Bartel.

In all, between entering the league in 2004 and the end of the 2018 season, Fitzgerald had caught at least one pass as a Cardinal from 18 different quarterbacks.

The mentors in Fitzgerald’s life, specifically members of his family, gave him such a solid foundation as a person that his football career won’t define who he is. This is a guy who has made the Pro Bowl 11 times, has caught over 100 passes in a season five times, and has had nine 1,000 yard plus receiving seasons.

Yet despite all those numbers, and despite the Hall of Fame bust that will eventually come Fitzgerald’s way in Canton, OH, it is his off field work that has made him beloved in Arizona.

Fitzgerald was selected as a speaker at the Arizona funeral for Sen. John McCain, an amazing example of how the state sees him as one of their premier players when connecting with the community. He is known in NFL circles for his amazing level of sportsmanship on and off the field, while his charity work is up there with any current or former player.

One such endeavor has been the First Down Fund. This well named charity funds positive activities for youth in the community amongst other goals. In a league sometimes lacking for role models, Larry Fitzgerald is a player that every NFL fan can look up to and be proud of.