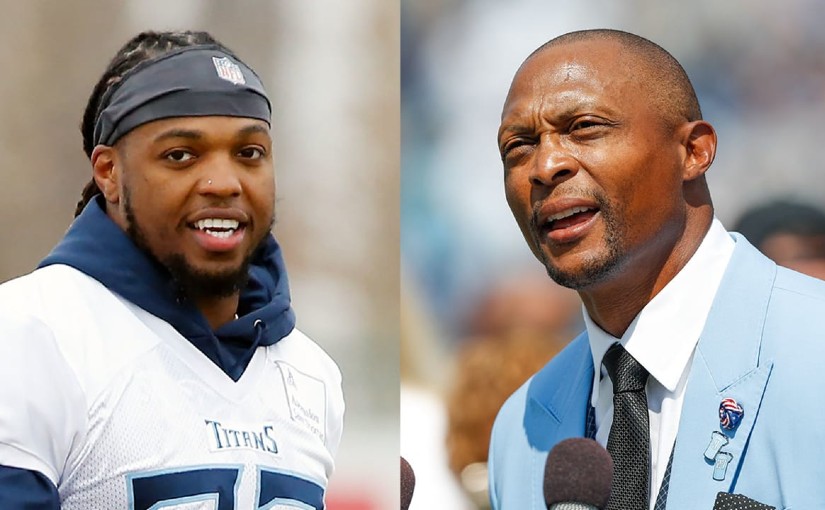 There are few things more entertaining in football than watching a running back take over a game. I was reminded this once again on Sunday as Derrick Henry did his best impression of a human freight train for the Tennessee Titans against the Indianapolis Colts.

While Henry is the latest Tennessee Titans’ running back to be that dominant of a force, he comes from a team with a surprising amount of stars at the position, especially if you go back to their days as the Houston Texans.  Recent fans will remember the speed freak of a back that was Chris Johnson – he of the ridiculous 4.24 time in the 40-yard-dash – while those of a certain age will recall the legendry Earl Campbell, one of the premier players at the position that has ever graced the NFL.

For others – mainly those of us in our 30s and 40s – the player most synonymous with the running back position in Nashville is Eddie George.

While Campbell was a beast for the Oilers in the late 70s and early 80s – a time before the magic of modern television and technology making games accessible to all – George was the lead back for the franchise from 1996-2003. This was a time of explosive growth in both revenue and popularity for the NFL, allowing more eyes to be on franchises weekly wherever you were in the country.

Also – and crucially – George was the back in charge when the Oilers moved states to become the Titans. This makes him the first true running back for this iteration of the franchise, making him feel like a more modern player even if he was rushing between the tackles almost 25 years ago as of writing.

George flashed in his freshman and sophomore seasons at Ohio State, but a couple of costly fumbles in a game against Illinois that the Buckeyes lost saw his playing time never really expand to where it could have been during those two seasons. As a junior he started to break out – he rushed for just under 1,500 yards and 12 touchdowns – but it was as a senior that he dominated the college landscape. This premier player won the Heisman Trophy in 1995 on the back of a year where he rushed for 1,927 yards and 24 touchdowns at an average of 5.9 yards per carry. It was also this season that George showed the type of power and durability that would become his hallmarks on Sundays.

George was the 14th overall pick of the 1996 NFL Draft and he was the third running back taken off of the board. He was picked behind Lawrence Phillips and Tim Biakabutuka, but outperformed both massively as they suffered from legal issues and injuries respectively.  George won the NFL Rookie of the Year award in 1996 and then went on to excel as the starting running back for the team without missing a start before moving to Dallas for a year at the end of the 2003 season. George is one of only two running backs to pass the 10,000 yard mark without missing a start (Jim Brown) and is second behind Walter Payton in consecutive regular season games started (130).

Those are names any running back would want to be associated with at the end of a career and help cement the status of George as one of the premier players at his position. George has only increased his legacy in retirement, working with charities including those trying to prevent Type 2 diabetes and even performing on Broadway – pre-pandemic – following 12 years of acting and singing lessons to hone his skills at a new craft. Some people are driving to be the best they can be multiple times in life and this premier player – and maybe one day premier actor – is just such a person.