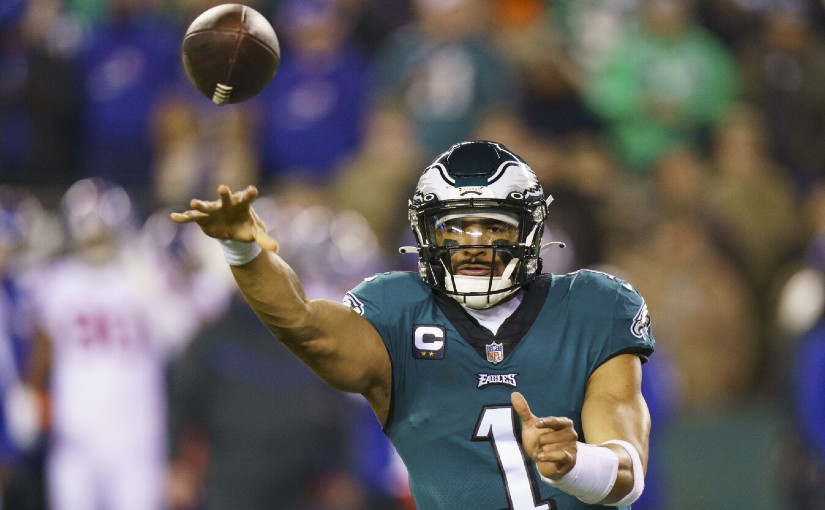 The Philadelphia Eagles finished the regular season with a 14-3 record that tied them for the best in the NFL. That alone would be good enough to see Jalen Hurts considered for the Premier Player of Pro Football Award, but digging a little deeper shows how truly pivotal Hurts has been to the success of his franchise in 2022.

The Eagles lost three games this season. Hurts didn’t play in two of those. In his 15 games as the starter, the Eagles went a stunning 14-1. Hurts posted the best numbers of his young NFL career – remember, this is his third season in the league – passing for 3,701 yards and 22 touchdowns to just six interceptions. Even more impressive was that Hurts completed his passes this season at a 66.5% clip, beating defenses with both the explosiveness and efficiency of his arm.

A dual threat in its truest sense, the former Alabama (by way of Oklahoma) quarterback was also a menace with his legs this fall. Hurts rushed for a career-high 13 touchdowns at 4,6 yards per carry. His rushing threat is a huge aspect of what makes Hurts uniquely talented. The Eagles love to call Run Play Options for Hurts, trusting their quarterback to make the correct decisions to gain essential yards and protect his body. It is something that the durable Hurts has done exceptionally well to date in his career.

A two-game stretch in late November and early December showcased Hurts at his very best. In a 40-33 win over the Green Bay Packers at Lincoln Financial Field, Hurts had to do it with his legs. The Packers did what they could to take away Hurts’ passing game – though he still had two touchdowns and zero picks with 153 yards through the air – so he responded by rushing 17 times for 157 yards at 9.2 yards per carry. The following week against the Tennessee Titans, Hurts rushed for just 12 yards but passed for 380 yards with three touchdowns. Two games, two wins, two completely different methods of getting there.

This dedication to winning, to doing anything it takes with his own game to propel the Eagles to a victory, has made Hurts a dominant player in 2022. He picked up instant chemistry with wide receiver AJ Brown after he joined the team from the Titans, as Brown produced a career-best year with almost 1,500 receiving yards and 11 touchdowns.

Sometimes it’s hard to believe that Hurts is just 24 years old. He is one of the premier players spearheading the youth movement in the NFL at quarterback. If he continues to play at his current level, the Philadelphia Eagles will be an NFC East – and Super Bowl – contender for the next decade.