Skip to content
The Premier Coach Award is presented to the Head Coach fans voted as the best in his or her sport via online polls. Candidates are announced about a month prior to the end of the regular sports season. Fans then vote not just for the Head Coach with the best regular season team record, but for the coach they felt led his or her team beyond expectations during the season that brought hope and excitement to them and/or their community. 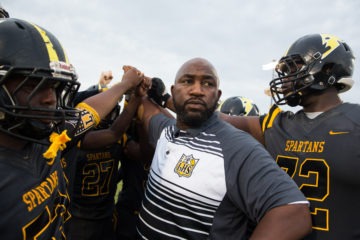 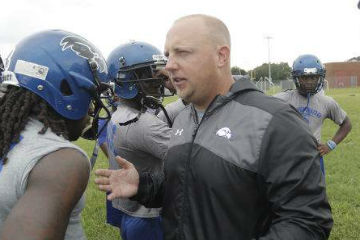 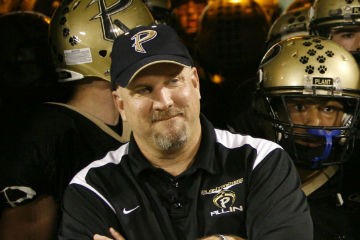 Cory Moore is one of those coaches who is always striving to push players to be their best. That is why there are so many Lakewood High School graduates playing both on Saturdays at high powered colleges and on Sundays in the NFL. That is also why Moore’s 2019 team was successful enough to reach the Florida Class 4A Football State Semifinals, and why he is now crowned as The 2019 Premier Coach of Tampa Bay High School Football.

Moore has been making noise on the Florida high school scene for years as a standout player and now coach.  He also spent time working for the Jacksonville Jaguars and time in various college programs learning how different systems work. The result this year was that Moore led the Lakewood Spartans to an undefeated regular season before falling just two points short of the State Finals in a 9-7 loss to eventual champions Booker T. Washington.

What becomes clear when watching Moore work is that his teams are a different kind of tough. The Spartans won so many games this year by blowout scores, but Moore’s signature in all of those games was that his defense would not concede points.  Scores like a 48-0 win over St. Petersburg to open the season became common place as schools of the caliber of Pinellas Park, Boca Ciega, and Sebring were all held pointless against the Spartans.

With all the big wins, though, one game stands out as a true mark of where Moore had the program this season. The game against Madison County was tied at 14 entering overtime, with the Spartans having been held without a score since the first quarter. Many teams would have folded in this situation, but Moore’s side was able to pull out a 21-20 gut check of a win which helped propel Lakewood forward to dominate the rest of their season.

Moore is a coach that wants to progress up the ranks within the football world. Until that pro or college job comes calling, however, he will always have Lakewood in the conversation as the best team in its class thanks to his work ethic, his football smarts, and his ability to coax every last piece of talent out of his players.

Taking over as head coach of your alma mater is not always the fairy tale homecoming that is hoped for when signing up for the job. If anything the pressure on a coach who was born and raised in an community before leading it as a coach is much more difficult that an outsider coming in with lower expectations. That is why what Evan Davis has achieved in two years with the Armwood Hawks is so spectacular.

2018 was supposed to be a down season for the Hawks. The team had been torn apart by graduation and they looked vulnerable after a very successful first year with Davis at the helm. Armwood had to replace the state’s 6A player of the year in running back Brian Snead, along with essentially its entire first string lineup on both sides of the ball.

The main piece they had remaining was Davis and it turned out that their coach was all they needed to retain in order to get back to the Florida 6A Title game and a rematch against Miami Northwestern.

Coaching is a culture thing and Davis has a winning culture entrenched at Armwood that is more important than the individual players that make up the team. While they fell to the Bulls for the second straight year, their 13-2 season shows that as long as Davis is at the helm, then this will be a team to be reckoned with.

The Plant Panthers and Robert Weiner had a successful season by any concept of the term. The Panthers made a run to the State semifinal, losing an epically close game to Bartram Trail 34-29. That game was one of only two losses the Panthers picked up all year as they finished 12-2 often blowing their opponents away under Weiner’s coaching.

Each of the 12 victories picked up by his charges this year will have been important to Weiner, but there will be a couple that stood out from the rest. The first of these was the 43-0 victory over East River in the first game of the playoffs. It was a contest where Plant did everything right, suffocating their opponent and scoring at will on their way to a massive victory. On that night Weiner was totally in control as Plant ran up and down the field.

The other signature victory was one that came about in a very different way. In the Class 7A Regional Final, Plant squeaked past No. 1 seed Lakeland 13-10. It was the kind of game that has become synonymous with Weiner in his years coaching in Florida, a game that looked out of his team’s hands for much of the second half. As seemingly always, however, Plant came back and took away a last gasp victory.

Those victories are ones that early in a career can be pinned on luck. Eventually though they become a habit, they become frequent, and the narrative changes from being lucky to being good. Robert Weiner was good – yet again – in 2017, so good in fact that no other coach compared.