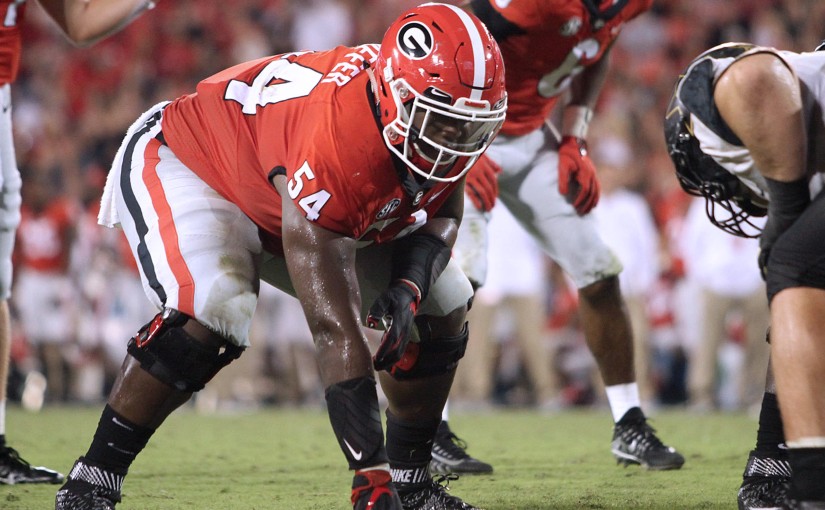 ATHENS, Ga. – Seniors Justin Shaffer, a First-team Pre-season All-American by Pro Football Focus, and Ameer Speed met with the media via Zoom this week and offered the following comments regarding fall camp and the upcoming 2021 season for The Georgia Bulldogs:

On the closeness of the offensive line:  “I feel like since I have been here, we have just gotten closer and closer. I feel like we have just been growing and growing. Me just being the older guy in the room I feel like I have to be the guy that is everyone’s big brother and make sure that everyone is connecting. At the end of the day, we are all one unit.”

On his progress during camp:  “I have just been taking things day by day and using every day to really get better as a team and as a player, as a brother and as a person. We are just taking it step by step and not letting everything get too ahead of us, like coach says, ‘moving day by day, live in the moment to be able to perfect that day so I can move on to the next day.'”

On how the team is meshing:  “We have just been trying to be a brotherhood; Coach Addae, Coach Smart, Coach Monken have been working with us all, allowing us all to perfect our crafts and just being the best we can be. Also, us older guys, we are able to help out. We are all open, when one person does something wrong ‘we are all like hey, you know you could have done this or done that’, we are all working together and trying to make each other the best we can be. We are only as strong as our weakest link so once we are all where we need to be we can do anything we want to do.”

On the maturity of this team:  “It is crazy as you get older, your thought process and the way you see things just evolves on and on. I forget that I am an old head sometimes. Just seeing that influence that you have on people on the team, it does mean a lot. You can feel it at practice with the old guys helping the young guys and just us all being there for each other.” 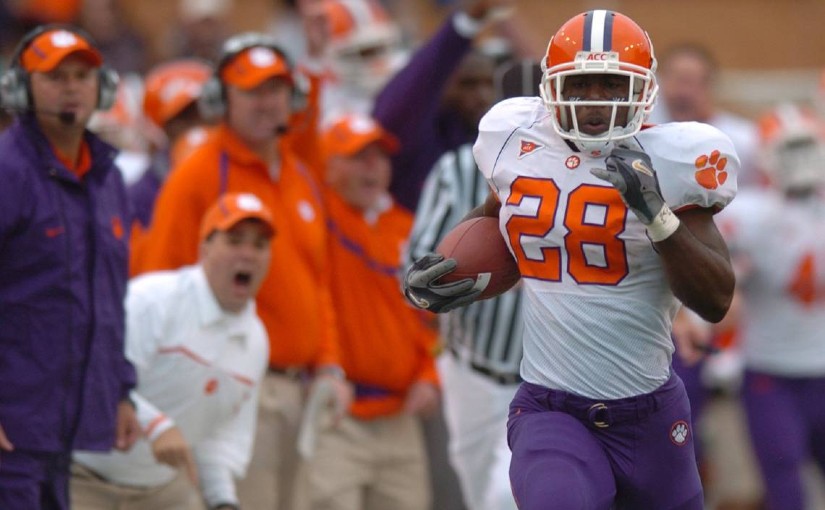 CLEMSON, S.C. — Clemson and the National Football Foundation (NFF) announced that former Clemson running back C.J. Spiller will be honored for his College Football Hall of Fame selection in an in-stadium presentation at halftime of Clemson’s home opener against South Carolina State on Sept. 11. During the ceremony, the National Football Foundation will present Spiller with a plaque celebrating his selection in advance of his formal induction at the 63rd NFF Annual Awards Dinner in Las Vegas on Dec. 7.

In January, Spiller was selected for induction into the College Football Hall of Fame as a member of the Class of 2021, earning the distinction in only his second year of eligibility.  He will become Clemson’s eighth overall inductee and its fourth former player to earn the honor.

Spiller was one of 11 premier players and two coaches selected from the national ballot to the 2021 College Football Hall of Fame Class. His historic Clemson career spanned from 2006-09, culminating with a senior season in which the premier player finished sixth in Heisman Trophy voting after winning ACC Player of the Year, and being selected as a unanimous first-team All-American. That season, Spiller scored 21 touchdowns and became the first player in ACC history to gain 1,000 yards rushing and 500 yards receiving in the same season.

Of the 5.47 million individuals who have played college football since Princeton first battled Rutgers on Nov. 6, 1869, only 1,038 players and 223 coaches have been immortalized in the Hall, including those slated for induction in the Class of 2021. His selection to the Hall of Fame puts this premier player in the top 0.02 percent of those who have played or coached college football.

Tickets remain available for fans wanting to witness and participate in the salute to Spiller’s historic career. Fans can purchase discounted tickets using the promo code SPILLER28 — as well as learn more about single-game tickets and three-game flex packs — at ClemsonTigers.com/footballtickets or by directly visiting bit.ly/SPILLER28. The game, which will be carried on ACC Network, is scheduled for a 5 p.m. kickoff. 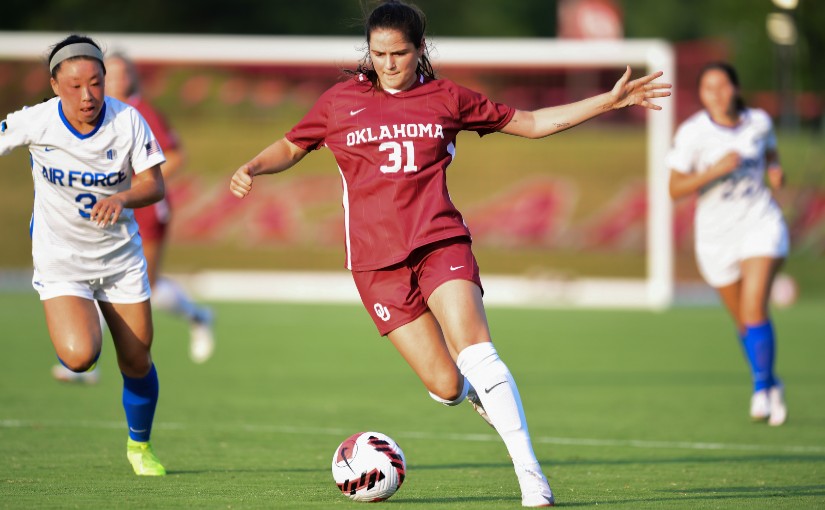 NORMAN — The Oklahoma soccer program is set to open the 2021 season on the road tonight when it takes the field versus the Houston Cougars at 7 p.m CT.

The Sooners, led by second-year head coach Mark Carr, will turn to his new-look roster that features 16 newcomers to open the season on a high note.  The game will be broadcast on ESPN+.

Carr will look to his first full recruiting class of 13 freshmen to make an impact on and off the field this season. The 13 signees come to Norman from all over the world, with seven domestic players and six international premier players.

“We have high expectations for OU soccer and the 2021 class will be expected to impact the program right away and provide immediate competition,” Carr said on his freshman class. “Here at OU, we love and embrace competition as we know this will only bring out the best in all of us. By adding this class to our core group of returners, the future is bright for soccer here at OU.”

OU soccer is quickly making a name for itself as a haven for international prospects and coaches to cement their places at the top of college soccer in America. All three members of the Sooner coaching staff are native to other nations, with Carr coming from England, Gough from Wales, and Bard-Martel from Canada. But the international flair in Norman reaches far beyond the touchline.

Muriel Kroflin joins Carr’s 2021 class from Langenargen, Germany, where she spent her youth leading SC Freiburg to Bundesliga titles and playing on the German youth national squad. Norweigan players Une Hebnes Georgsen and Andrine Westlie round out OU’s international group, with Georgsen starting in net for the Norweigan youth national team at the U17 UEFA women’s qualifiers, while Westlie led Bærum SK and the league in scoring after making her debut at 14.

Carr didn’t just retool his roster with a large freshman class but also utilized the transfer portal to bring three ACC student-athletes to Norman.  Makala Thomas spent three seasons at Florida State, helping the Seminoles to the 2018 national championship and playing in 29 games in her time at FSU. Alexis Strickland joins the Sooners from perennial powerhouse North Carolina, where she played in 27 games for the Tar Heels as a freshman before not appearing last season. The final transfer in 2021 is Molly Feighan, who played 16 games last season at Virginia Tech and started all 19 games as a junior in 2019.

All three premier transfer players – Thomas, Strickland, and Feighan – can play any position in the attacking third for Carr’s side.  They join Erika Middleton (Miami), Sakky Yoshida (Oregon), Bri Amos (Kansas), and Olivia Odle (Virginia Tech) as transfers into the OU program.

LED BY THE SENIORS

Despite such a large group of newcomers, the Sooners’ leadership comes in the form of their 12 seniors who have combined for nearly 25,000 minutes played at the Division I level. Lauren Haivala, Jazzy Richards, and Erika Middleton are all familiar names for Sooner fans, playing in 94 matches for the Crimson & Cream.

Following the team’s match tonight, they’ll travel to Beaumont, Texas, for a showdown on Sunday night with Lamar.