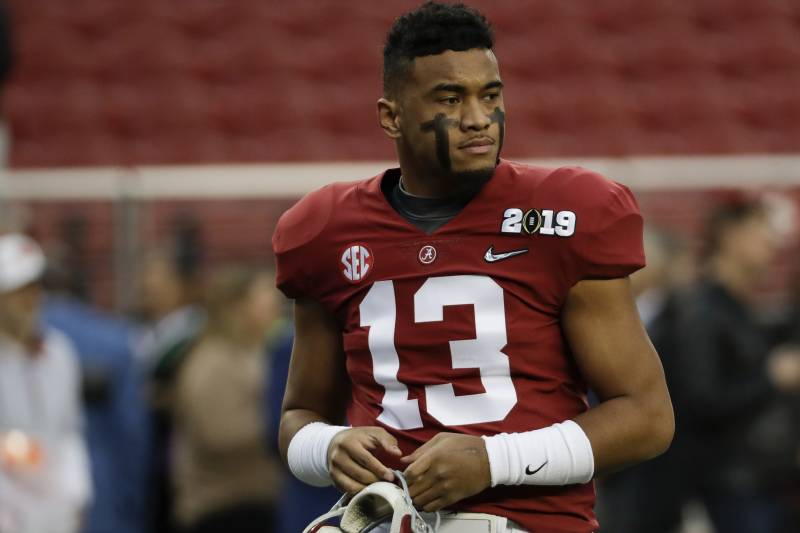 He is one of the premier players of college football right now, and in April of 2020, he will be drafted into the NFL as one of the top picks in the 2020 NFL Draft.  He may be the very first pick off of the board if he decides to join the league after his redshirt sophomore season with the Alabama Crimson Tide.

The Heisman frontrunner for most of the 2018 season, Tagovailoa was run down at the last minute in the voting for that particular trophy by the 2018 Premier Player of College Football, 2019 NFL Draft No. 1 overall pick, and new Arizona Cardinal QB, Kyler Murray.  It was not, however, a case of Tagovailoa imploding and losing the trophy. The Hawaii native threw for almost 4,000 yards on the season, completing 43 touchdown passes and rushing for another five on the ground.  Instead, it was a case of Murray picking it up down the stretch to win the award.

Tagovailoa has two Alabama seasons under his belt.  In the first of those years, he won a national championship by sparking an unlikely, and some would even argue seemingly impossible, comeback against Georgia.  In the second, he broke records after records at a school that has been doing this football thing at a very high level for a long, long time.

It all begs the question as to what is next for him on the college stage?

Alabama fans will only be happy if Tagovailoa, as one of the premier players in the game along with fellow quarterback Trevor Lawrence at Clemson, combines his two seasons to make Alabama in 2019 almost untouchable. There is no reason to think that Tagovailoa will not again get close to (or even surpass) the 4,000-yard mark and, given the talent around him, 50+ touchdown passes should not be out of the realm of possibility.

Tagovailoa’s biggest strength as a quarterback, and why he is a premier player, is not a trait that can be defined in any physical test.  While he has outstanding anticipation of a route and touch on a pass, not to mention enough athleticism to keep plays alive, it is his mental acuity for the game that sets him apart.

At the NFL level, it simply does not matter how strong your arm is if you cannot break down a defense mentally, making the correct reads before the snap and the perfect decisions, in a split-second, when the ball is in play.

Tagovailoa is a player everyone should try to watch and learn from both on and off the field.  From his outstanding work ethic, to his commitment to his faith and school, he is someone we can all get behind as one of the premier players in the game to continue his success to the next level.