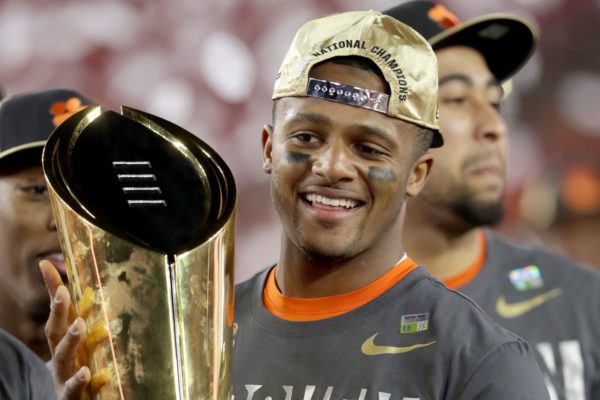 Year 2020 is upon us. Given that we aren’t all in flying cars and living in space this is something of a letdown. What is not a letdown, however, is the level of college football played over the last decade. Many premier players have run through the sport in that time, but here are five of our picks for the top players of the 2010-2019 decade in college football:

Clowney played for three seasons at South Carolina where he was the main playmaker on the Gamecocks defensive line. He totaled 129 tackles with 47.0 tackles for a loss, 24.0 sacks and nine forced fumbles in three seasons where he terrorized the SEC. While his overall play is more than worthy of a spot on this list, the future No. 1 overall draft pick of the Houston Texans has an argument for inclusion based on one single play. In the 2013 Outback Bowl against Michigan, Clowney provided one of the highlights of the decade with a hit, forced fumble, recovered fumble on Wolverines running back Vincent Smith that will be played for years to come.

In the 2010s Wisconsin really was running back U. Melvin Gordon and Montee Ball were great, but it was their last running back of the decade in Jonathan Taylor who was legendary. Taylor became the first player to hit 6,000 rushing in just three seasons when he passed the mark in 2019. He also finished in the top nine in Heisman Trophy voting – sixth, ninth, fifth – in each of his three years in Madison. Taylor won the Doak Walker award that goes to the best running back in the nation in both 2018 and 2019, with this premier player never rushing for less than 1,900 yards in a season.

Davis began his career as a high school player only deemed good enough to garner one Division 1 scholarship offer. Davis took that offer from the Western Michigan Broncos and finished the 2017 season as the all-time leader in receiving yardage, a record he holds to this day. Davis was quick out of the blocks as a freshman where he caught 67 balls for 941 yards and six scores. Over the next three seasons he caught an additional 46 touchdown passes while never having less than 1,408 yards or 78 catches in a season. His record of 5,278 yards receiving is going to be tough for anyone to top.

Baker Mayfield had a strange start to college life which saw him play in eight games for Texas Tech in 2013 where he passed for 2,315 yards and 12 touchdowns. It was a solid, if totally unspectacular debut season, but one transfer to another Big 12 school later and Mayfield became a decade level star. The Lincoln Riley offense was everything it needed to be for Mayfield who led Oklahoma to three Big 12 titles and a pair of CFP appearances. Including the season in Lubbock, Mayfield threw for 131 touchdowns and 14,607 yards as a college quarterback.

Watson had a nice enough freshman season – 14 touchdowns, two picks, 1,466 yards in limited action – but few could have seen from that snapshot what a monster player he would become over his sophomore and junior campaigns with the Clemson Tigers. This premier player exploded onto the scene in 2015 where he passed for over 4,100 yards and 35 touchdowns, before bettering those numbers as a junior with almost 4,600 yards and 41 touchdowns to 14 picks. He was a true dual-threat too, with another 629 yards and nine touchdowns on the ground. The upshot of this was Clemson winning its first national championship in 35 years with Watson at the helm.