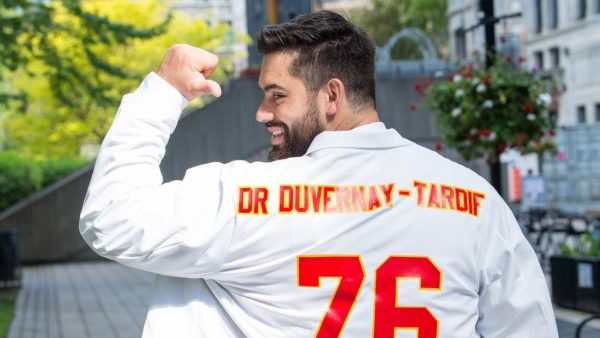 There is a stereotype about NFL players – and athletes in general – that is simply not always true. While many conform to the same likes and the same lifestyles, there are others that walk to a slightly different beat and that are still premier players both in the league and in life.  One such player is Kansas City Chiefs guard Laurent Duvernay-Tardif.

You have probably seen Duvernay-Tardif play and paid little attention to the 321 pound, 6-foot-5 offensive linemen. Linemen – after all – do kind of blend in with one another on the field unless they have some kind of distinctive hairstyle or other noticeable feature. On the field Duvernay-Tardif doesn’t really have this, he is just a solid pro who has worked his way into the Chiefs starting lineup after originally being drafted in the sixth round of the 2014 NFL Draft.

Where you may have noticed Duvernay-Tardif is when he introduces himself on the Sunday Night Football broadcast where the players say their name and their college – or at least they should, but that is a debate for another time. In a world of “Alabama” and “The U”, Duvernay-Tardif is alone in coming into the NFL from McGill. He is also alone in having a heavy French-Canadian accent as he hails from the town of Mont-Saint-Hilaire in Quebec, Canada.

Even that, though, isn’t what truly sets the Chiefs’ player apart. What would do so is that somehow between 2010 and 2018 he was able to transition his college career in Canada into an NFL career in the Midwest all while pursuing the medical degree that he graduated with in 2018.

If the NFL was cool, then Duvernay-Tardif M.D. would be on the back of the big Quebecers jersey every Sunday afternoon. This is the type of player that the NFL should celebrate, a guy who was able to stretch a traditional four year medical degree into an eight year odyssey and fit in lessons on physiology and anatomy around learning an NFL playbook and schemes on a weekly basis.

Duvernay-Tardff was the first – and so far only – active NFL player to graduate to becoming a physician from medical school. This meant hours spent shadowing doctors and taking care of patients, all while still working gym sessions and staying in NFL shape. Duvernay-Tardif has been able to achieve all this – and is an example to all – because of his combination of insane work ethic and a thirst for knowledge and culture that we could all strive to work towards.

This premier player also sees his role in educating and being transparent on the subject of concussions in the NFL as important. He is an advocate for new technologies and more openness about the issue, noting that keeping youth players out of tackle football until there are in their teens – and thus understanding aspects like tackle technique and force – would be a step in the right direction.

Duvernay-Tardif will likely never be classed as anyone’s favorite player – the guard position doesn’t get a lot of love like that – but he is a player that all fans should be aware of for his approach to life and his leadership in showing just what is possible if you apply yourself.