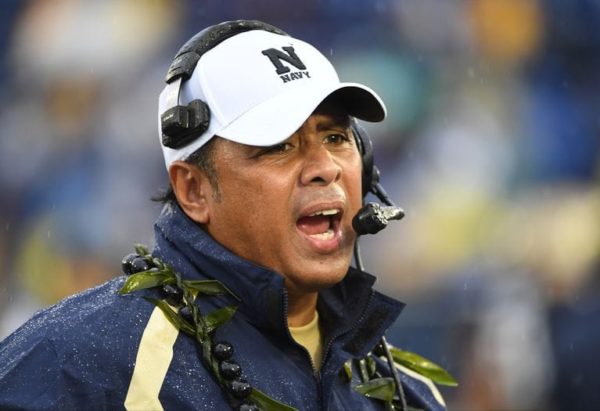 It can be argued that the three most difficult coaching jobs in the FBS are at the military academies.  Coaching at Air Force, Army, or Navy is often a life-long dream for the man in charge, but given factors such as military service (voiding players an NFL shot), the extra work that comes with being a military student, and mandatory fitness requirements, the job certainly isn’t easy when it comes to the basic college football ideas of recruiting and game-day preparation.

That is why it is important to note just how impressive Navy head coach Ken Niumatalolo has been during his decade in charge of Navy.  The coach has put together a program that easily marks him as one of the premier coaches in the FBS today.

In 2018, Navy went 3-10 and lost to Army for a third straight year.  While the Black Knights were trending up, the Mids were trending down, something that hadn’t happened often since Niumatalolo took the reins from Paul Johnson in 2008.  The winningest coach in the history of the program – with many other accolades to go beside his name – Niumatalolo responded by shaking up his staff and making some key hires.

One of those hires was a full-time nutritionist as Coach Niumatalolo realized that his players needed vital nutritional guidance in line with the top programs in the country if the Mids were going to get back to the level he expected.  He also gave the keys of the offense to QB Malcolm Perry, a player who excelled as a sophomore but who Niumatalolo felt he hadn’t push to his next level as a player.

Navy runs a triple-option offense that is a throwback to a day before the forward pass was even invented.  Niumatalolo knew that he needed to make changes here too, bringing in a passing coach (Billy Ray Stutzman) to work with Perry and make him a competent passer to go along with the running ability he had already shown.

Part of being a premier coach in any sport is knowing when you have to shake things up and – more importantly – knowing when you are doing something wrong.  It is easy as a coach to think that you know best at all times, especially when you have been at a job like Niumatalolo has for over a decade. The problem with this is that ideas get stale and coaches end up tapering off to nothing.

Every budding coach out there can learn something from the way Niumatalolo has conducted himself at Navy. From his initial burst phase, through the bad seasons, to reinventing the team with some key staff changes and additions in the 2019 season.  The future is always in question, but Navy has one of the premier coaches in the country leading their team and – as such – they seem to be in very good hands.