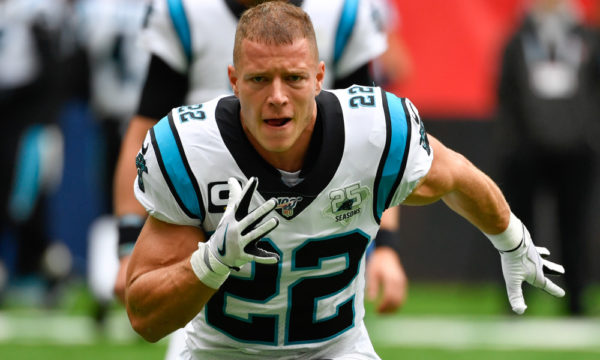 Christian McCaffrey is one of those premier players that refuses to be told what he cannot do. When he arrived at Stanford after playing multiple positions in high school – generally excelling whenever he was questioned by his coach – McCaffrey was seen as too small and too slender to play as a running back in head coach David Shaw’s power running scheme. Shaw quickly learned how things were going to be with McCaffrey, a player whose drive, determination, and unlimited skill set have him on the verge of one of that all-time great NFL seasons by a running back in the league’s 100th year.

“I’m a running back,” McCaffrey told Shaw. “I came to Stanford. I want to run the power play.”

In a world of five wide receiver sets and platooned running backs, McCaffrey is the ultimate outlier. This premier player seemingly never comes off of the field – he is a fantasy football owner’s dream – and he is a true three down back in an era where players of that type have, by and large, been completely phased out of the league.

McCaffrey can play this way – and this volume – because he is simply outstanding at everything it takes to be a modern running back, even if he is doing it all with an old-school work ethic and durability. The Panthers obviously use him as a runner – through eight games in 2019 he has over 1,200 yards and 13 total touchdowns – but his play is so much more than that.

The Carolina Panthers look for McCaffrey on basically every play. He is a great blocker and a fantastic decoy, but he isn’t used in that way. Instead, he is often running routes out of the backfield or – when the Panthers get creative – out in the slot where he becomes an absolute match-up nightmare against a linebacker, a safety, or all but the best coverage cornerbacks. We haven’t seen a player in the mold of Marshall Faulk in the league since the Ram’s great hung up his cleats.  McCaffrey is the closest thing we have seen to the Super Bowl XXXIV winner in years.

The eighth overall pick of the 2017 NFL Draft has years ahead of him performing at this level. Yes, he touches the ball way too much, but he plays with a style that never seems to leave him on the end of crushing hits like a lot of running backs. He tends to give out the punishment instead of receiving it, picking his moments as all premier players do in order to maximize his production for the team.

It is too early to tell if McCaffrey will be an all-time great, but his first couple of years in the league have done nothing but show he has the class to get there. McCaffrey is a record setting back – first player in NFL history with 1,000 yards rushing and 500 receiving in 10 games – and he is only getting better.