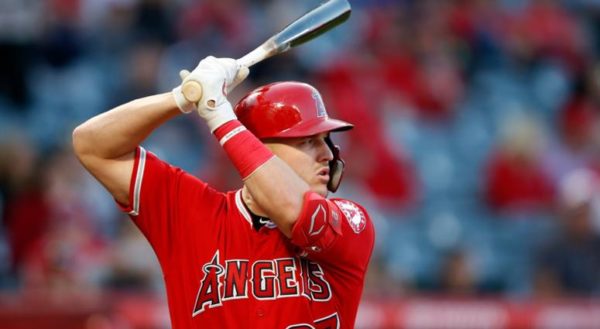 To reach the mountain top of being a legendary sports figure isn’t easy. It usually happens late in a players career (Tom Brady) or when a player dominates his game with a big play and a loud personality (LeBron).

Even then, these players are legends in leagues and sports that are still relatively young. What, then, would you say to the claim that we have a legendary player who at 28-years-old still has much of his career in front of him? Oh, and he is a premier player statistically destroying a sport that has been played professionally in this country since the year of the first east-west transatlantic radio broadcast.

Welcome to the career of Mike Trout.

Walking through Trout’s career before he hit his 28th birthday is a little ridiculous. He ranks in the top 10 in home runs, walks, and on-base percentage, just three of the many significant categories he is among the best all-time in at that age.

He is already an eight-time all-star and a two-time league MVP, with the odds being good that he will win a third MVP award at the end of the 2019 season. Trout, like most of the premier players we see, is only getting better as he gets older. This season he is going to break his personal career-high marks in RBI, home runs, and on-base plus slugging (OPS) categories. Given how stellar his stats already were, that is some achievement.

If this were four or five decades ago, Trout would be the most talked-about sportsman on the planet. Even in the days of Barry Bonds and Alex Rodriguez, baseball was a factor in the national conversation. In 2019, however, the sport just hasn’t found a way to grip fans in the way football and basketball seem able to do. That is why Trout could walk through most towns in America as the premier player of the national pastime and most wouldn’t even recognize his face.

While Trout increases his home run numbers and his Wins Above Replacement (WAR) ranking seemingly every time he plays, it is the MVP numbers which might be his most impressive legacy when all is said and done. Trout has finished in the top-two of voting for the award every full season he has played the game. The only exception to this was in 2017 where he played just 114 games due to injury. Even then he finished fourth. Seven seasons in the top five is the longest such streak for any player since 1931. When the voters for the biggest individual prize in your sport are that enamored with your game, then you are the premier player on the planet.

Trout is a Hall of Famer in waiting. That he could potentially have another five to seven seasons in his sport is truly impressive. Watch the numbers grow and watch the legend increase as Trout does what he does day after day in the major league. One day, just maybe, Mike Trout will be more recognizable to the average American sports fan.