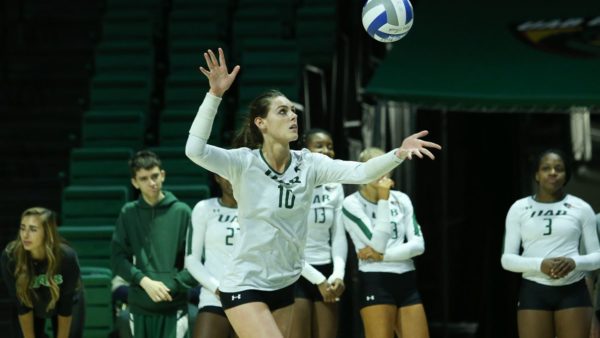 BIRMINGHAM – With its first match of the season only days away, the UAB volleyball team is set to begin year two of the Amy Pauly era.

“I feel really confident about this group heading into the season,” said Pauly. “They have worked really hard all summer to make sure they were prepared for the first day of practice. I feel like our starting point this year is ahead of last year’s, and that’s always the goal. We focus on the process and how every little detail can help move this program forward.”

The Blazers will first be traveling to Muncie, Ind., on Aug. 30 to compete in the Ball State invite, taking on Ball State at 10 a.m. and USF at 2:30 p.m. in Worthen Arena. The squad’s home opener will be the following Tuesday, Sep. 3, at 7 p.m. in Bartow Arena as in-state rival Alabama State comes to town. UAB’s full schedule consists of a 27-game slate, highlighted by 12 home matches featuring seven conference matches and five nonconference matchups including SEC foe Alabama.

“I’m excited for our non-conference slate. We have a good mix of physical teams and scrappy ball control teams that I think are really going to challenge us to play as a unit and play together consistently,” Pauly said. “I’m most excited about how many home opportunities we have. We had a great turn out for matches last year, and I expect Bartow to be rocking this year!”

UAB returns the entirety of its coaching staff after improving in every statistical category and picking up 13 wins in its debut season, the most wins the program has seen since 2013. Along with six newcomers, the Blazers return 10 players in 2019, including four of six starters. Most notably, UAB returns major firepower on the offensive side from last year’s squad as three of its top five attackers will be in green and gold once again this season.

The eldest of the group is redshirt junior Emma Mitchell (pictured), who was second on the team in kills with 231 on the year and tied for the team lead in service aces with 24 last season. Another key cog returning this season is true junior Abby Carlile, who led last year’s squad in kills with 286 and finished third in total blocks with 67 on the season. Rounding out the vital crop of outside hitters returning is redshirt sophomore Alex Kells. The Ontario, Canada, native was top five on the team in kills and service aces, finishing just shy of the 200 kill threshold with 198 and adding the third most service aces with 18 last year.

“We’re returning a solid core,” she said. “I know they have learned from last year and are prepared to take on an even larger offensive role this year.”