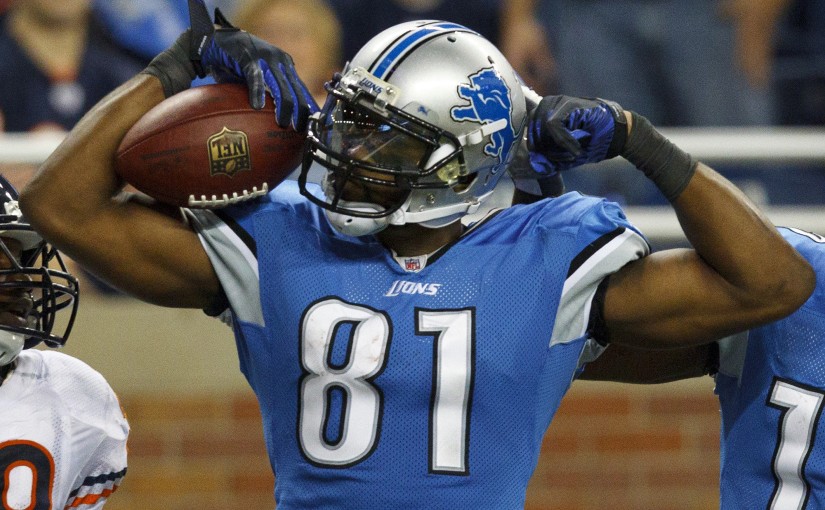 Ideas for player features come from all over the place. Often it is browsing the internet and reading articles. Sometimes it is falling down a YouTube hole and watching highlights of a player in their prime. This time, it was a post on Reddit that I couldn’t quite believe. The post read:

“Between Tom Brady’s 3rd Super Bowl appearance and his 10th, Calvin Johnson has been drafted, retired, and made the Hall of Fame.”

We have talked about Brady before on this site and likely will again in the future. Today’s piece is going to focus on the other side of this particular post as, despite his clear greatness, it still feels like Megatron is undervalued when it comes to looking at the all-time greats to play the wide receiver position in the NFL.

Johnson was a mismatch at the wide receiver position the likes of which we have rarely seen. The closest comparison would possibly be Randy Moss, but why Moss was all lean, athletic, sprinting muscle, Johnson combined his speed with a physique cut from the cloth of WWE more than the NFL.

At 6-foot-5 and almost 240 pounds, Johnson was built more like a tight end than a traditional receiver. It was that size combined with elite speed – Johnson ran a 4.35 40-yard-dash with those measurements – that gave Johnson the physical tools to be one of the most dominant wide receivers of all time.

Johnson was a career Detroit Lion. Like a lot of career Lions – most notably Barry Sanders – this meant he had little to no success in the playoffs. The entire history of Detroit in the postseason can actually be explained by their Wild Card loss in 2011 at the hands of the New Orleans Saints. Johnson – the player the Saints knew they had to stop – totaled 12 receptions for 211 yards and a pair of touchdowns. It was an epic display by the best receiver in the league, and the Lions lost by 17 points. That was one of just two playoff games in which Johnson ever played.

In the regular season, however, Johnson was a monster. Cooper Kupp (in 17 games) challenged Johnson’s record in 2021, but Megatron still holds the NFL single-season receiving yards record from his work in 2012. That year he and quarterback Matt Stafford combined for Johnson to finish with 122 catches for an unreal 1,964 yards. Yes, Johnson averaged over 100 yards receiving per game despite being Detroit’s only viable offensive threat.

The year before, Johnson scored 16 receiving touchdowns. In 2013, he added another 12. He was a fantasy machine during that three-year stretch and when he sparingly retired at the end of the 2015 season he had totaled over 11,600 yards receiving and 83 touchdown catches.

The other thing that is common among Detroit superstars is that they retire while still producing. In his last year in the league, Johnson had 88 catches for 1,214 yards and nine touchdowns. Other records he still holds include the most consecutive games with over 100 receiving (8), most receiving yards in a single game in regulation (329), and most games with at least 200 receiving yards (5).

If Johnson had played for a better team – or even one with more national exposure – he would be held in the same esteem as the very greatest the game has ever seen. That is how good he was at his peak and we shouldn’t forget it.