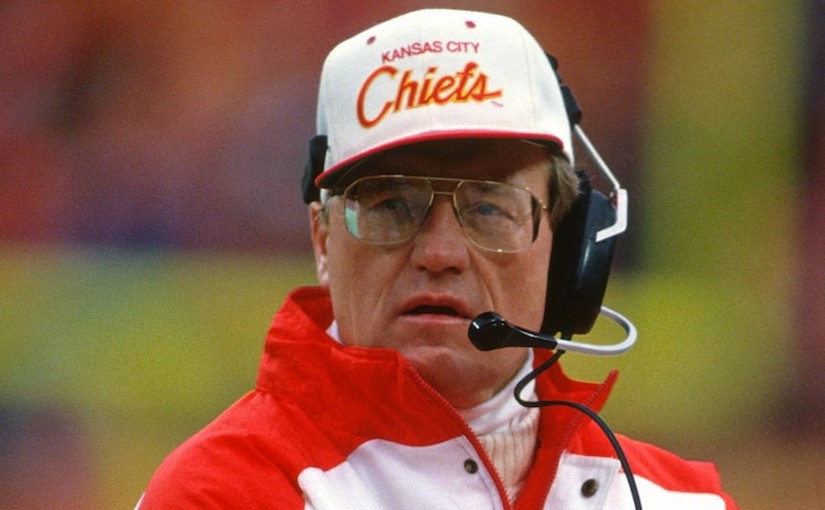 If there is one NFL premier coach who has a legacy defined by winning in great numbers and then losing in the bigger games, then that would be Marty Schottenheimer. Schottenheimer enjoyed an astonishing 200 career wins as a head coach as he led four teams to become the eighth-winningest coach in the history of the NFL. Those four teams – the Cleveland Browns, Kansas City Chiefs, Washington Redskins, and the San Diego Chargers – combined to go 200-126-1 under the premier coach who died at the age of 77 on February 9, 2021.

You know that a coach has had an impact on the game when an entire style of play is named after him. Schottenheimer believed wholeheartedly in “Martyball”. This method of winning football games relied on a hard-nosed approach from hard-nosed players. As the league was evolving around him in the late 90s and through the 2000s, Schottenheimer continued to preach “Martyball”, building the success of his teams – and their entire roster – around an overpowering running game and a defense that would lay their bodies on the line whether it was 3rd-and-30 in the first quarter or 4th-and-one with the game on the line.

Schottenheimer – a man who lived by his mantra of “one play at a time” – could never find the success he deserved in the postseason. The coach with a career winning percentage in the regular season of 61% was never able to make his style of football work in the playoffs. Schottenheimer went 5-13 when coaching in the postseason, a career winning percentage in those games of just 28%. This included first-round playoff exits with teams such as the 13-3 Chiefs in both 1995 and 1997, along with the 14-2 Chargers in 2006.

That Chargers team – perhaps the best overall squad that Schottenheimer ever coached led by NFL MVP LaDanian Tomlinson – imploded in what was to be Schottenheimer’s final NFL game. They lost a home divisional round game 24-21 to Tom Brady (that guy again) and the New England Patriots. It was a loss – combined with the tension between Schottenheimer and general manager A.J. Smith –that saw Schottenheimer fired in a move that shocked the NFL world given the team they had put together and Schottenheimer’s obvious ability to win football games and have his team believe in his methods and his tactics.

While some of the losses may have been down to poor clock management or a stubborn belief in the power of his system, it is hard to look at this premier coach as not being a tad unlucky to have never reached a Super Bowl. He lost twice to John Elway-led Broncos teams in the AFC Championship Game while coaching the Browns in games that became known as “The Drive” and “The Fumble”. To have one game lost in a way that gives it a name that lasts down the decades is rough, to have it happen twice is downright cruel.

It is with the Chiefs that Schottenheimer is synonymous with most fans. You can lay a direct path from the work that Schottenheimer produced in Kansas City through the Dick Vermeil era and to the Andy Reid-led team that is one of the most feared in the league today.

“When Marty arrived in 1989, he reinvigorated what was then a struggling franchise and quickly turned the Chiefs into a consistent winner,” Chiefs chairman and CEO Clark Hunt said in a statement. “Marty’s teams made Chiefs football a proud part of Kansas City’s identity once again, and the team’s resurgence forged a powerful bond with a new generation of fans who created the legendary home-field advantage at Arrowhead Stadium.”

After that, it was to San Diego and another brutal playoff loss that came from a player mistake and not a coaching one. With the Chargers up by eight and with six minutes to play, Marlon McCree picked off Brady and the game should have been sealed. Instead of dropping to the turf, however, McCree was hit and fumbled with the Patriots recovering. On such small margins are playoff football games won and lost and Schottenheimer, for all his outstanding coaching, often seemed to be on the wrong side of them.

To dwell on that, though, is to diminish a career. The NFL is a better place for Schottenheimer having been involved and when premier players like Tomlinson and Drew Brees speak of Schottenheimer’s work ethic, wisdom, and attention to detail it tells you everything about what kind of coach he was.