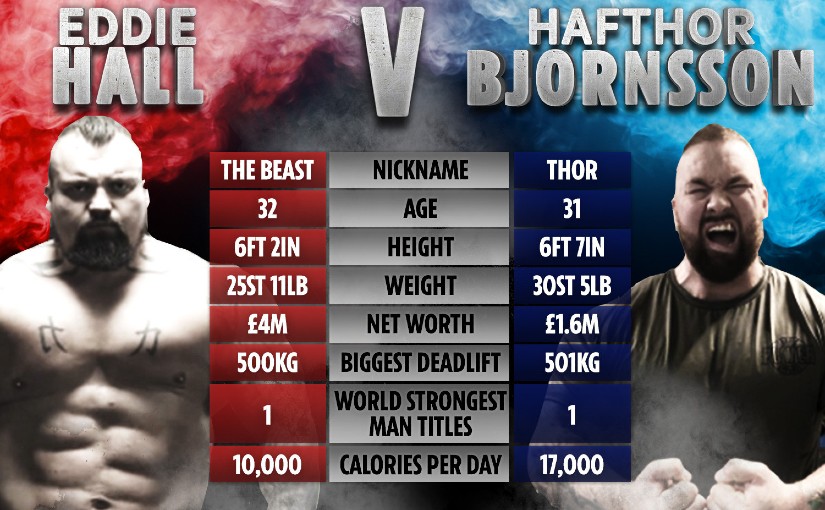 Live sport may still be something of a novelty right now but that hasn’t stopped yet another event being added to a crowded 2021 slate. While we are busy getting our fill of Korean League Baseball, Bundesliga soccer, and NASCAR races with no one in the stands, next year is the one where the premier players will really come out to play. In 2021 we will see – alongside the return of full seasons of the leagues we love – the Olympic Games, the UEFA European Soccer Championships, and the British Lions tour of South Africa to name but a few.

It will be September of next year in Las Vegas, Nevada – the home of all things weird and wonderful – when a pair of former winners of the World’s Strongest Man competition will be throwing haymakers. The participants are 2018 World’s Strongest Man Hafthor Bjornsson taking on 2017 World’s Strongest Man winner Eddie Hall in a bout where the two pugilists will combine to weigh in – barring some weird diets leading up to the contest – at well north of 800 pounds.

Hall, the smaller of the two, stands at 6’3” and weighs 410 pounds. Bjornsson, a mountain of a man, stands at 6’9” and tips the scales in the region of 450 pounds. That mountain moniker is not one without merit either as this premier player was cast as Gregor “The Mountain” Clegane in the epic fantasy series Game of Thrones.

If this contest feels like it came out of nowhere, well that is because it did. It was all triggered in the middle of the Coronavirus crisis when Bjornsson set a new deadlift record by lifting 1,104 pounds in his home gym. Yes. That was 1,104 pounds – not a typo.

“Absolutely no legitimate sport would acknowledge World Records broken out of competition and you are undermining the very sport you are claiming to champion,” Hall wrote on Instagram. “I genuinely look forward to having my record broken and seeing what is possible. I think you are probably the man to do it, there’s no denying that and I’ll still shake your hand afterwards and say well done . . . if you do it under the appropriate conditions.”

This broke a 4-year-old record of 1,102 pounds that was set by Hall. The fact that the record breaker was set in a home gym angered “The Beast” and one quick war of words on Instagram, wheels were set in motion for a match to be announced.

Bjornsson confirmed as such by revealing the fight poster with the following message on his own Instagram account earlier this week.

“It’s official! September 2021 in Las Vegas Nevada, the Mountain vs the Beast. The next year and a half of my career will be solely dedicated towards this fight. I can’t wait to have my family ringside as I throw down. I’m coming for you.”

The training part of this fight is going to be fascinating. There is no doubt that Bjornsson and Hall are both elite athletes that deserve the premier players tab. It is not possible to compete in strongmen competitions as they do without the right knowledge of nutrition, exercise science, and a personal determination to be the best athlete that they can possibly be.

Training for a boxing match, however, is slightly different. Strongman training is very much an individual pursuit where it is all about bettering yourself. Boxing is a much more tactical sport, one that requires learning a different skillset than anything they will have applied in previous build ups to peak condition. Both men will have the power to slug it out, but it might just be the one who learns a little more ring craft over the next 18 months that comes out on top in what will be a huge event next fall.