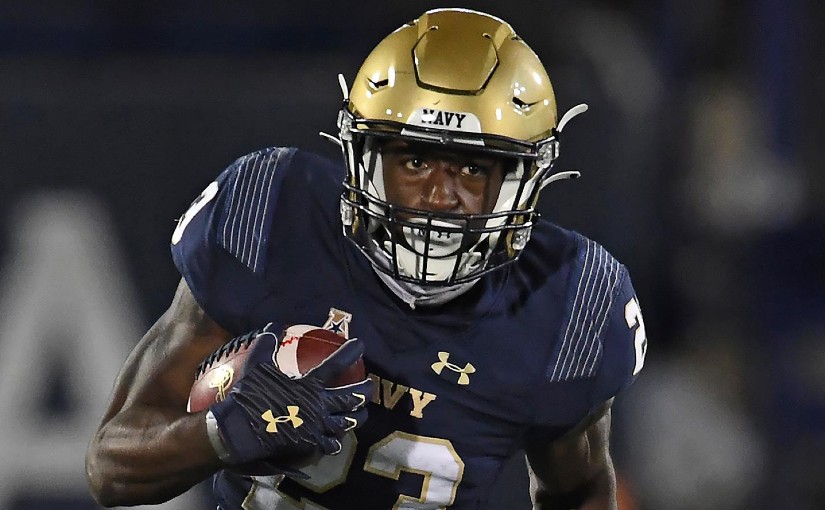 Myles Fells is known among his Navy teammates and coaches as one who attacks his football and classwork with passion and looks at a turbulent, troubled world with compassion and a yearning to help make it a better place.

In the short term, the senior slotback from Little Rock, Arkansas is preparing to graduate with a degree in political science and commissioned as a 2nd Lt. in the United States Marine Corps. He likes the idea of sticking around next season on temporary assigned duty as a graduate assistant coach.

As long as Fells is serving someone or something larger than himself, he is a happy man which is why the US Navy Academy has nominated him for The 2020 Freddie Solomon Community Spirit Award presented by The Premier Players Sports Foundation in Tampa, FL.

In the long view, Fells wants to lift and inspire others from a high-profile position of leadership. He talks matter-of-factly about running for public office successfully in his home state. He envisions himself serving the people of his home state as their Governor.

“My main goal is to leave [the world] better than the way I found it,” Fells says. “As I’ve seen things that have happened where I’m from, and as I’ve seen the state of things in various places around the United States, I feel the call to help my community. Life can be better — especially in places like where I’m from.”

There is Fells giving a short and passionate speech at a rally at the state capital in Little Rock. He is venting frustration following the May 25 killing of George Floyd in Minneapolis, an incident that angered a nation.

There is Fells, bullhorn in hand, saying much during a snippet of a speech he organized without writing a word down. He estimates he came up with his speech in about five minutes.

“I grew up Black in Little Rock. My mom has had ‘the talk’ with me, about getting pulled over by police,” Fells said, identifying with the cheering crowd that includes many public school teachers and other African-Americans as he relays his own fear.

“I was driving back from a football game, and I got pulled over by three cop cars, for not having a light on. I was terrified,” he continues. “That was the same year [2012] Trayvon Martin was killed — a young Black man who looked just like me. I can’t help but think of my two brothers standing over there. What if it was them? What if it was one of my classmates?

“I couldn’t sleep for the past week, because this is weighing on me. The fact that we have so much traction [protesting racial injustice]…I have hope,” Fells adds. “Do everything in your power to be a strong role model. Continue to educate. It’s uncomfortable, but it’s time to have those conversations. Let’s help the people of Arkansas spread peace around the world!”

The rousing energy behind those words spoken in Fells’ clear and booming voice reflects the same quality he brings to each day on the Yard. Senior slot back C.J. Williams calls Fells “a machine” for the way he works tirelessly on his game and lifts teammates’ spirits. Senior Justin Smith admires how Fells exudes charisma and attracts followers with his need to know things about everyone on the team (Where are you from? How many brothers and sisters do you have? Names?).

As much as they feed off of Fells’ upbeat, day-to-day outlook, the Navy football family marvels at Fells’ mature perspective on a world that has taught him real-life lessons, both heart-warming and tragic.

The son of service-driven parents — his mother, Kecia, is an elementary school counselor and has worked in education for more than three decades; his father, Kenny, is a chemist who processes hazardous waste at a treatment storage and disposal facility two hours south of Little Rock in Eldorado, Ark. — Fells was developing his caring ways, even as a boy barely walking.

“At daycare, Myles was always quick to help the other kids, [for example] by picking up a bottle when one would drop it,” says Kenny Fells, who was drafted in 1986 as a running back by the Washington Redskins. “His work ethic was just different than most kids his age. I’ve told him since elementary school he’s a natural-born leader. People look to him, flock to him.”

Up until nearly middle school, when he attended Pulaski Academy in West Little Rock, Fells lived in the John Barrow section of the city, a neighborhood stricken by the twin scourges of drugs and violence.

The family then moved about 20 miles outside of Little Rock and lived on five acres that represented the picture of safety and security. The boys — older brother JaRon, now a nurse in Oklahoma City, and Morgan, a junior at Joe Robinson High School, Myles’ alma mater — commuted to school in Little Rock.

For financial reasons, Kenny, Kecia, and Morgan moved back to Little Rock after Myles had started his journey in Annapolis. Last spring, when the Covid-19 pandemic erupted, students all over America took to online learning at home. Myles went back to his old neighborhood in March, where he would remain for several months, before returning to Annapolis.

While living back in Little Rock, the killing of Floyd at the hands of Minneapolis police touched off the nationwide discussion and demands for racial justice in America. Fells says he attended at least half a dozen protests, against the wishes of his worried mother.

“I asked my mother do I want to look back on this time and be someone who played it safe, or do I want to be a guy who made his voice heard?” Fells recalls. “Do I want to tell my kids one day I was out there trying to help or did I run and hide? So many people have been there to help me. I’ve got to help as much as I can.”

One of the things that spurred Fells on to make his speech at the state capital was a terrible run of local tragedy that touched him. Over about 10 days, Fells says five young men whom he’d known as a youth died — four by gunshot, one by opioid overdose.

“I didn’t notice how bad things were when I was younger living in the J.B. neighborhood — the killings, the robberies, the drugs,” Fells says. “We’ve seen shootings, heard gunshots.”

“Myles has been through and seen some things that a lot of us haven’t seen or been through. He’s got a perspective and wisdom a lot of us don’t know,” says Ken Niumatalolo, Navy’s 13th-year head coach, who believes Fells will be an exceptional leader in the military and in politics, should he eventually choose that path.

“[Fells] doesn’t make speeches often, but the guys perk up when he talks,” Niumatalolo adds. “He speaks the truth, [with] no ill will, the best intentions. He’s one of the most respected people on our team because he has a great heart. He’s done a lot of selfless things for our team without complaining. He’s a really good football player. Myles is also one of the best human beings I’ve ever known.”

“Myles is the type of teammate that keeps your head above water, keeps you level-headed and seeing the big picture,” says Smith, who adds Fells helped him to let go of his frustrations as an offensive performer and to embrace his effective roles on Navy’s kickoff, kickoff return, and punt return teams.

“I come from an opposite sort of background in Virginia Beach, compared to the situation Myles comes from. But he doesn’t run away from challenges or adversity, he attacks them head-on,” Smith adds. “He’s got friends who are in jail or have died due to the violence in Little Rock. He’s never satisfied with the way things are. He’s a born leader. I’ve seen examples of it around our team for a long time. He doesn’t do fake energy.”

As an outstanding student-athlete, Fells’ talent on and off the field blossomed in high school, first at Pulaski Academy over two seasons. As a sophomore, he led Pulaski in rushing on a team that won the Class 4A state title. But Fells tore his ACL in the state semifinals and could not play in the title game.

After having knee surgery, Fells transferred to Robinson High in the fall of 2015. He struggled with the knee and wasn’t the same player, but he re-committed to rigorous training and weight lifting to prepare for his senior year. And Fells came into his own in new ways academically.

He was chosen to represent Robinson as a rising junior at Boys State, a week-long camp and immersive program in civics education, operated in part by elected public officials and complete with governing bodies. Fells responded tremendously to Boys State’s focus on participation and personal experience and its design that mirrored the government’s operation in Little Rock.

Fells was chosen by Boys State officials as Governor of Arkansas at Boys Nation.

“Myles has always had this overarching idea of justice and standing up for what he believes is right,” says Damian Patterson, a career educator in Arkansas who coached and mentored Fells as a youngster. “His drive to be successfully kept pushing him in football and he’s driven to serve, just like the people he’s been around.

“We’ve talked a lot about pushing the envelope to change policies and not letting it get too emotional. Be calm and deliberate in your actions,” Patterson adds. “Myles exhibits all of those things. I tell him he’s not responsible for the fate of Black America, just do his piece. When he came back home during Covid, I told him he would be the first Black governor of Arkansas.”

While the knee injury scared off numerous Division I schools recruiting Fells — Arkansas, Vanderbilt, Memphis among them — Navy wanted him by the middle of his senior year in early 2017. By then, Fells was hitting on all cylinders.

He was a two-way starter in football, and shined on both sides of the ball, as Robinson reached the quarterfinals of the state championship tournament. Fells rushed for 928 yards and 14 touchdowns, had 240 yards receiving and seven more scores, but startled everyone by his prowess on defense as a first-time starter at LB, where Fells led 4A with 115 tackles, including 20 tackles for a loss and four sacks.

Fells was one of three finalists for Arkansas Defensive Player of the Year. In addition, as a senior, he led 4A in scoring in men’s soccer, after going nearly a decade without playing the sport. He served as captain of both teams that year.

And after not expressing much interest in running for Class President as a senior, a Robinson administrator urged him to give a speech with the rest of the competitors in the school auditorium, before the vote was held. Fells was the last person to speak. He was voted Class President.

“He is the type of kid everybody gravitates to,” says Tyler Updegrove, who coached Fells at Robinson. “You watch him play, you want to play harder. And you see he truly has a heart for other people.”

Fells has started every game for the Mids in 2020. He has averaged 7.3 yards on 19 carries, caught a career-long, 73-yard touchdown pass, and thrown a slew of crisp blocks.

And those close to Fells are waiting to see how far this born leader takes that part of his game. Kenny Fells gets emotional when he imagines what his son can become.

“If it’s something he wants, you’re not going to stop Myles,” he says. “He’s sitting on the verge of greatness.”

Article provided by US Navy Academy