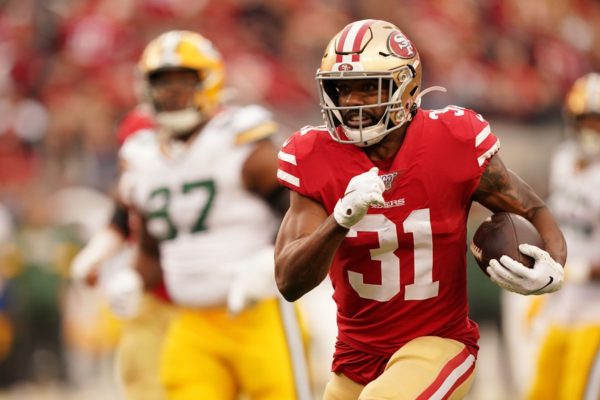 Not everyone rises to be a premier player in the same way. That is especially true in the NFL, a league where the bust rate of top draft picks and the rise to the top of lower round guys happens more often than the ‘draft gurus’ would ever want you to believe.

These stories, though, remain compelling. That is why the story of San Francisco 49ers running back Raheem Mostert will get so much play as we approach Super Bowl LIV where Mostert’s 49ers will face off against the Kansas City Chiefs.

Mostert was the premier player on the field as the 49ers ran all over the Green Bay Packers in the NFC Championship game on January 19th.  Mostert, however, was not a highly touted college athlete who was expected to dominate an NFL defense as easily as he did in Santa Clara. This is a player who was cut by no less than six teams in the space of an 18 month span at one point in his career.

Being cut once is enough of an ego check for many to consider their future in the sport. To be cut six times in such a short space of time – Mostert was basically packing his bags every three months – has to be beyond demoralizing. To be able to suck up those cuts, to learn from them, and to come back a better and more determined player, shows everything about the undrafted free agent out of Purdue in 2015.

Players that bounce around the league in such a manner aren’t supposed to do this. Mostert has yet to actually start a game in his NFL career, but in the NFC championship match he rushed for the second most yards in a single game in NFL playoff history. He went for an insane 220 yards and four touchdowns, beating defenders in every way imaginable. It was an astonishing display of talent from a man who could have easily fallen out of the league four or five times in his career already.

This quote from Mostert shows how he uses the past to fuel his future:

“I actually still have the cut dates. And I look at that before every game. I look at the cut dates when I got cut. I’ve been on, like I said, seven different teams. The journey’s been crazy. Not even — not everybody can deal with that type of stress and pain and agony that I went through.”

Everyone can learn from this journey as they are hit with a disappointment – or a string of disappointments – in their life. Be like this premier player and rise above the noise and the negativity of other people’s perception of you to succeed.