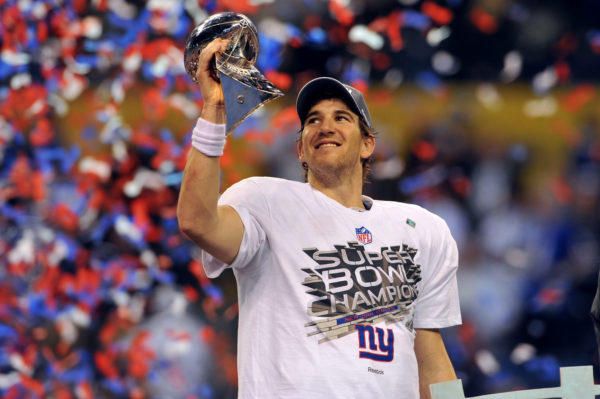 Placing Eli Manning in the history of NFL quarterbacks is no easy job. Manning has been overshadowed for his entire career by other signal callers – not least of which was his brother Peyton – and he has faced extra levels of scrutiny and criticism simply because he plays in the New York market.

Manning, however, rose above all that noise, above the dominance of Tom Brady and the passing stats of Drew Brees, and today he should be regarded as one of the premier players in his sport over the last decade or so.

It says a lot about Manning and his career that his two Super Bowl wins – both wins over Brady, Bill Belichick, and the New England Patriots no less – were achieved with the New York Giants carving their route to Super Bowl success as a wild-card team. Manning was never seemingly a player who could win 12, 13, or 14 games a season, and to be fair this was as much to do with the supporting cast that the Giants built around him as to the play of the quarterback himself. What Manning could – and did – do however, was to perform like a premier player in the big moments and on the big stage.

In each of his two Super Bowl wins his team was a double-digit underdog to win the title. The first game saw David Tyree pull down his famous catch off of his helmet, but it was Eli who put the ball up into a position for Tyree to make a play. It is a play still seen on ESPN to this day, but the significance of Eli’s pass, of preventing the Patriots from the first perfect season since the ’72 Dolphins marched their way through the NFL, seems to have been a little lost in the decade that has followed.

Real Giants fans love Eli. They are aware that this premier player gave everything for the franchise through injury and scrutiny for his entire career. Eli was never the flashy quarterback – either in playing style or lifestyle – that the New York tabloids wanted, but he was a premier player at the start as he carved out a place for himself on the team’s Mount Rushmore alongside the likes of L.T. and Michael Strahan.

Manning is the best passer in Giants’ history. His 116-116 record is obviously worse looking than the 101-68 record Phil Simms put up, but it is fair to say that Sims had far more help than Manning ever saw. That is both in terms of the coaching and the defenses that Sims played with and the lack of both those aspects that Manning had to muddle through.

Premier players achieve despite their surrounding cast and that is the legacy that Manning has left in New York. The time was right to make the switch to rookie Daniel Jones, but never underestimate the influence and success that Eli achieved and will leave in the Big Apple.