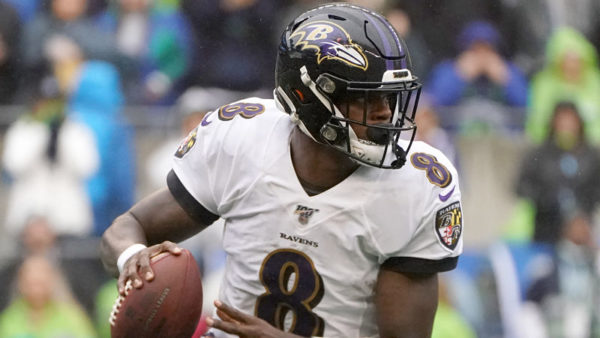 Patrick Mahomes might be the most watchable player in the NFL in 2019 – assuming that his dislocated kneecap heals as expected – but there is another young quarterback in the league who has quickly become must-see-TV in his own right.

Lamar Jackson will finish the 2019 regular season as a 22-year-old – he turns 23 in January – but this premier player in the NFL has made a dramatic leap in his second year of playing to the point that he could be a dark horse in the race for MVP.

Jackson is the most unique quarterback to perhaps ever play in the NFL. He is a running threat every time he touches the ball, but no one would really describe him as quick or hugely explosive. His running ability is much more of a glide than a sprint, with the 6-foot-2, 212-pounder eating up the space with a stride that makes him look taller than his frame. He has worked his throwing mechanics down to a science, making passes with accuracy and power in his second year that he would never have been able to complete as a college player at Louisville. He is also full of those intangibles that make a player like Russell Wilson of the Seahawks such a star.

What Jackson really has going for him is his work ethic. The final pick of the first-round of the 2018 NFL Draft is one of those guys who has pure dedication to his craft. He wants to be the best, to challenge for Super Bowls and to build a legacy in Baltimore. That is why the Ravens were so willing to promote Jackson to be their starting quarterback – no matter how raw he still was – after Joe Flacco went down with an injury in a game against the Pittsburgh Steelers.

Jackson finished his rookie year starting seven games, throwing for six touchdowns and three picks while rushing for five more. Through seven games in 2019, a small sample size admittedly, Jackson has clearly improved. He has thrown for 11 touchdowns with five picks and has rushed for three more scored. His completion percentage is the biggest change, however, as Jackson has gone from tossing completions at a rate of 58.2-percent to hitting them at 65.1-percent. The result of this is that the Ravens, behind their premier player, are looking like one of the teams to beat in the AFC.

Jackson is a new era quarterback, but he is playing on an old era team. In a pass-happy league, the Ravens under John Harbaugh are running the ball as effectively as anyone in the NFL. Jackson is a huge part of this as he churns off 100-yard rushing games as consistently as most mid-level running backs. He is one of those premier players that will do whatever it takes to win, eschewing personal stats for the good of the team.

All in all, with Jackson at the helm things are looking very bright in Baltimore.