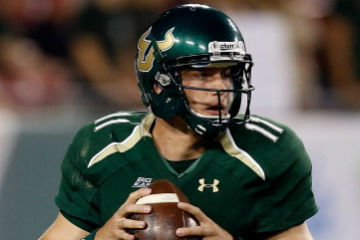 Matt Floyd, a redshirt sophomore from Milton, FL, is very involved on the USF campus.  The 2013 Freddie Solomon Community Spirit Award winner holds numerous leadership positions while balancing his time between his football obligations and being a highly engaged and productive member of the USF community.

The 2012 Big East All-Academic selection was also nominated for the 2013 AIPAC student activist of the year award.  A dual major in political science and international studies, he has served as vice president of The Order of the Golden Brahman leadership society, president and founding member of the CUFI cadre charter, a member of the USF National Hazing Prevention Board, a member of the USF Hillel, AIPAC pro-Israel activism cadre and a member of the 2013 New Traditions Competition Task Force.

While attending the AIPAC (American Israel Public Affairs Committee) Policy Conference in Washington D.C., Floyd was among a group from USF that received the “Top 5 Campus Advocates of the Year” award.

About The Award:  Freddie Solomon played his college football at the University of Tampa and went on to play for the Miami Dolphins for three seasons before joining the San Francisco 49ers where he helped win two Super Bowl championships. His career in the National Football League as a wide receiver came to a close after 11 years. Then the Sumter, SC, native known as “Fabulous Freddie”, came back to Hillsborough County to make a more lasting impact. Solomon devoted the next 12 years of his life to the youths of Tampa Bay, working with the Sheriff’s department to teach kids life lessons through football. His efforts impacted more than two decades of youths and his lessons are still carried on in the community. The Freddie Solomon Community Spirit Award continues Solomon’s efforts to help make the world a better place by annually honoring a collegiate football player who has impacted the lives of others through giving and community service.

A three-year letterman at receiver, Tipton (Apollo, Pa./Apollo-Ridge) has distinguished himself off the field with a passionate commitment to helping others.

Tipton created L.O.V.E. (Living Out Victoriously Everyday), a program that helps “empower, provide hope and build a community for collegiate student-athletes who are dealing with mental, emotional, and physical struggles” through fellowship and access to professional help. Tipton was inspired by his own personal challenges to start this highly impactful effort that ensures no member of the Pitt Athletics community will face their adversities alone.

Tipton’s additional volunteerism includes serving as a mentor at the Waypoint Youth and Community Center, promoting the importance of reading and education at area elementary schools and helping to host Make-A-Wish Foundation children and local veterans groups at Pitt’s football facility.

Graduating from the University of Pittsburgh in four years with a bachelor’s degree in communication, the senior wide receiver has already embarked on his graduate studies in Pitt's School of Social Work.

Duke has a history of high quality student athletes both in the classroom and on the playing field so it is perhaps no surprise that Jonathan Lloyd continued that tradition during the 2018 season. The two-year starting wide receiver caught 46 passes for 557 yards and five touchdowns this season for the Blue Devils, but Lloyd’s skills on the field are only part of his story.

Taking on a number of leadership roles within the Duke locker room, Lloyd has emerged as one of those voices on the field that every player listens too. Having already picked up an undergraduate degree, Lloyd is busy working on his masters along with his football pursuits.

In addition, Lloyd was named to the 2018 Allstate American Football Coaches Association Good Works Team because of his off-field actions. He assists at a local chapter of the Ronald McDonald House with fundraising, tutors at Lakewood Elementary School, and spends time with kids mentoring at the Boys and Girls Club of Greater Durham. He also visits skill kids at Duke Children’s Hospital, helps with building projects with Habitat for Humanity, and serves with the Durham Rescue Mission to help rebuild people lives through his faith.

Lloyd is an inspirational student-athlete. In a world where many blame a lack of time on their lack of action, Lloyd is always looking for another project to help, another kid to lift up, or another family to support.

It has been quite the year for Florida Atlantic kicker Greg Joseph.  The senior almost didn’t have a college football career at all – choosing to walk-on with the Owls rather than take an offer at a lower school – but he has fought through that adversity to finish his career as a record-holder.

It was the game against Navy back in September where Joseph etched his name in the lore of Florida Atlantic football.  In that game he made a 54-yard field goal – the longest kick in school history – but that was one of just three records set on that one play.  Joseph also became FAU’s all-time leading scorer AND became the player with the most made field goals in school history.

Joseph’s biggest strength as a kicker is the power that he produces.  He is not a player that is going to have field goals fall short because of a lack of distance, as he is likely to blast them and test the netting behind the uprights.  His leg has been a big weapon for FAU during his career, with his ability to consistently drive the ball through the end zone on kickoffs and negating opponents’ kick return units entirely.

Community Service wise he is involved in all team and department functions but uses the summer to do more and often gets his teammates involved.  Last summer he got the specialist and the offensive line involved with “Paint Your Heart Out”.  They literally painted a home for someone in less than two hours.  Joseph also serves as the President of the Student Athlete Advisory Committee and was on the Watch list for the Lou Grozza Award.

Ironically, Joseph was not really called upon as the Owls won Conference USA for the first time with a 41-17 victory over North Texas.  Nor was his leg needed as the destroyed a massively overmatched Akron team 50-3 in the Boca Raton Bowl.  Every player on the team though knows that they would not have been in those showcase events without their star kicker and that his departure will leave a massive hole in the lineup next year.

Florida State junior wide receiver Travis Rudolph, a West Palm Beach native, has been a stalwart in the Tallahassee community throughout his three years here, regularly attending community outreach projects with his teammates and other Seminole athletes.  In August of this year, one of Travis' visits became national news when he had lunch with Bo Paske, an autistic middle schooler that Travis saw eating lunch by himself one day.

Travis, who didn't know Bo or that he was autistic, sat with Bo to eat pizza during lunch.  One of the workers at the school took a candid picture of the two, which made it's way to Bo's mother Leah's attention.  She posted a heartwarming thank you on Facebook, a move that made Travis' unselfish act go viral.  Travis and the FSU football team continued their relationship with the Paske's, with Bo and Leah frequently seen at FSU practices and games throughout the season.  Prior to the season opener against Ole Miss, Travis surprised Bo with a personalized jersey and tickets to the game in Orlando.

Earlier this year, Travis and Bo's story was recognized by the Musial Award, given annually to the stories of sportsmanship and compassion throughout sports, joining the likes of Cal Ripken Jr. to earn this year's honor.

Off the field, Dobson was a two-time Academic All-America selection by CoSIDA in 2014 and 2015.  He carried a 3.71 grade point average and was named to the Georgia Southern President's List for posting a 4.0 in the 2015 spring semester.  He was a four-year member of Georgia Southern's Student-Athlete Advisory Committee.

Gamecock quarterback Dylan Thompson not only does good on the field, but off it as well.

Thompson set a Carolina school record and led the SEC with 3,564 passing yards.  His 274.2 passing yards per game led the league and his 3,492 yards of total offense was another school record.  His 270 completions was the most in the SEC.

For his off the field work, Thompson was named to the SEC Comunity Service Team for his visits to hospitals and mission trips this past summer to Israel and El Salvador.  He also went to several elementary, middle, and high schools to speak to the students.  He was a finalist for the Wuerffel Trophy and named the quarterback on the academic all-district team.

Matt Floyd, a redshirt sophomore from Milton, FL, is very involved on the USF campus.  He holds numerous leadership positions while balancing his time between his football obligations and being a highly engaged and productive member of the USF community.

The 2012 Big East All-Academic selection was nominated for the 2013 AIPAC student activist of the year award.  A dual major in political science and international studies, he has served as vice president of The Order of the Golden Brahman leadership society, president and founding member of the CUFI cadre charter, a member of the USF National Hazing Prevention Board, a member of the USF Hillel, AIPAC pro-Israel activism cadre and a member of the 2013 New Traditions Competition Task Force.

While attending the AIPAC (American Israel Public Affairs Committee) Policy Conference in Washington D.C., Floyd was among a group from USF that received the "Top 5 Campus Advocates of the Year" award.

There were plenty of cool places Asa Watson could have visited this past summer - beaches, mountains, and other alluring coves.  So where did the NC State TE wind up?  In Los Angeles, on Skid Row.

This was one of many projects Watson has participated in that led him to be name the first recipient of The Freddie Solomon Community Spirit Award.  It wasn't what Watson had intended to do.  He had planned to attend Athletes-in-Action grueling Ultimate Training Camp in Colorado until a friend mentioned the LA, California mission trip.  That's when the 6-4, 225-pound tight end changed his route.

"I decided in about 20 minutes God had totally different plans for me," said Watson.  The son of a pastor, Watson spent three weeks in LA. He viewed the city's glitz and glamour districts, where prosperity abounds and hopes rise to skyscraper heights, and then, not far from the bright lights, he saw how the scenery and scent dramatically changed.

Around Skid Row he saw empty, dilapidated buildings and streets littered with stench and trash.  Worse, he saw the abandoned and downtrodden, homeless and disabled people, pimps and drug addicts.

"It was like a different country", Watson said. I've never seen that much homelessness and deprivation in one area.  It was shocking.  We would talk to the people, pray with the people."

In a letter to his supporters, Watson wrote "God opened my eyes to poverty, racism, and social injustice. . .  He also taught me about the vastness of his love, the need for the gospel and my personal need for grace."